From the moment Owen Farrell stepped in front of the haka and smiled crookedly, everyone at Yokohama Stadium knew something was brewing.

Farrell didn't smile at the best of times, but winked at Aaron Smith, the All Black's black man, with the look of someone ready to perform an act of betrayal.

The players from England formed a 'V' around the captain, with Billy Vunipola and Joe Marler crawling along the halfway line into opposition territory. 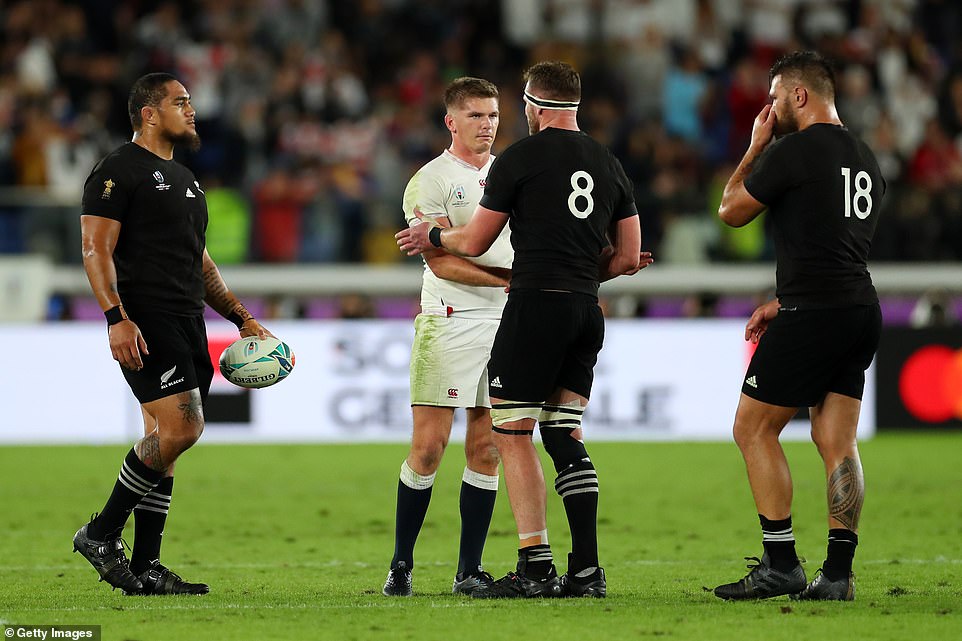 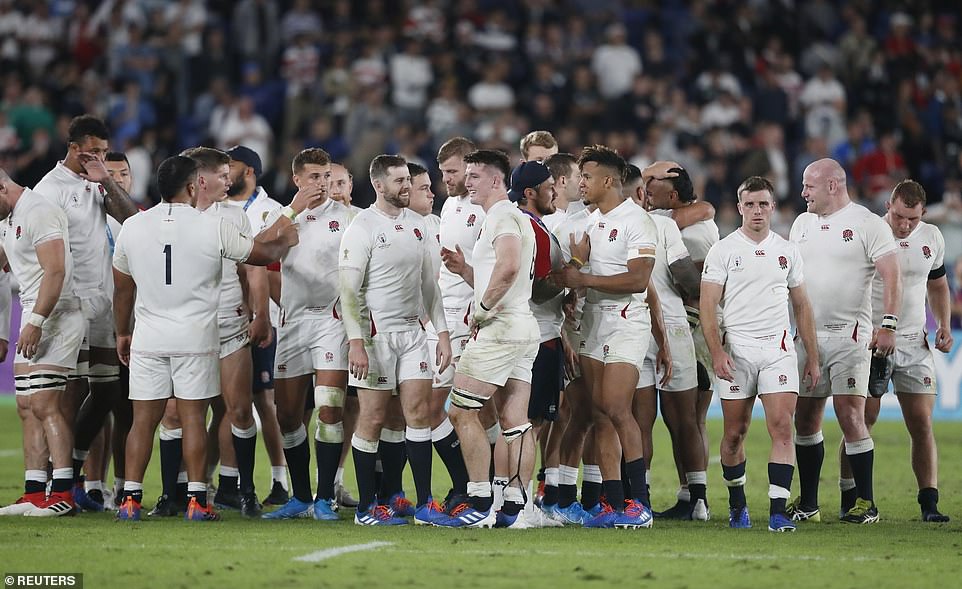 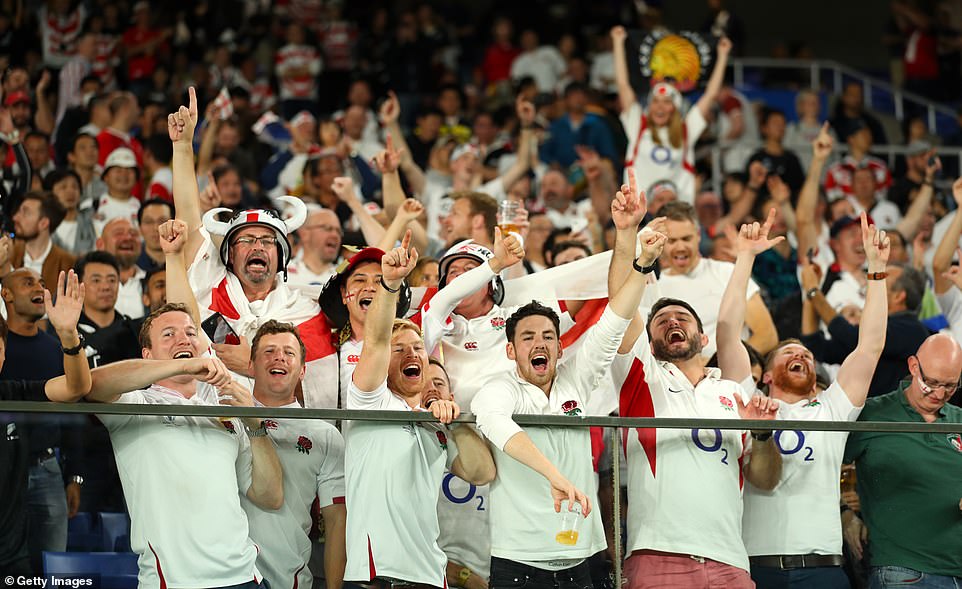 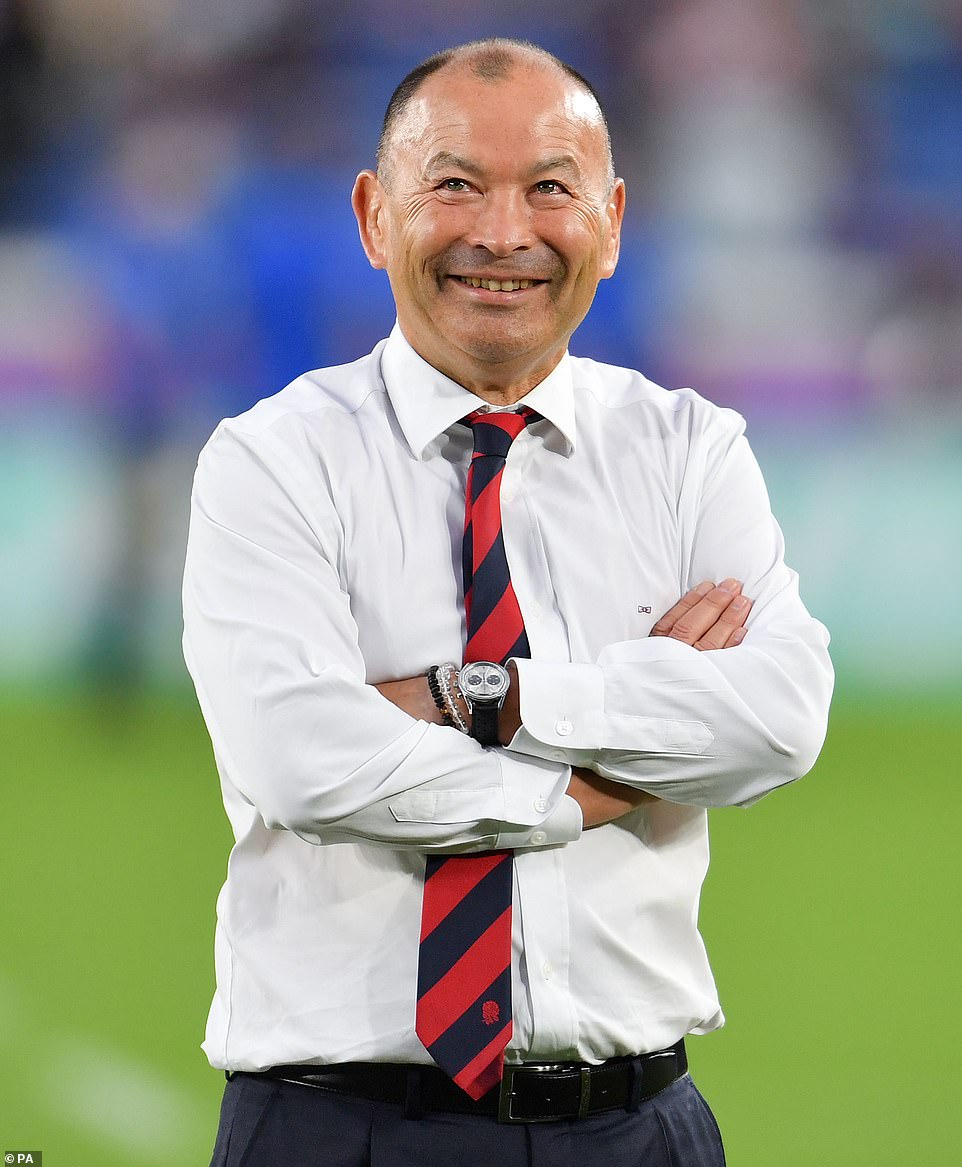 That sort of thing backfired in the past, but one famous night in Yokohama England got it right. The All Blacks didn't know where to look.

What followed was undoubtedly England's best 80-minute performance in history. Standards have increased since 2003 and New Zealand have not lost a World Cup game for 4,403 days.

It was a display of power, accuracy, turnover and total destruction on the gain line.

Kieran Read and Brodie Retallick were reduced to a battered, bruised, and bloody crowd. & # 39; Crash, bang, wallop & # 39; was the sound of All Blacks being smashed from the pedestal until next week.

Sam Underhill announced itself as a disarming sensation, Maro Itoje messed up and Tom Curry played as an Englishman Richie McCaw.

On the 20-minute walk from Yokohama Station to the stadium, Japanese street vendors set up stalls selling exclusively New Zealand merchandise. Black shirts, black scarves, all black. The All Blacks brand has been bigger than rugby itself, but the boys in English history have laughed at their reputation.

Prior to the kick-off, England set up a seven-meter channel below the touchline and made their way through a maneuver of defenders.

Bish, bash, bosh. New Zealand coach Steve Hansen watched from the halfway line with his hands in his pockets, while Marler grabbed Kyle Sinckler by the sleeve of his shirt, giving him some words of choice. It was a sign of things to come. Maintaining the intensity of their preparations, England's players went flying. 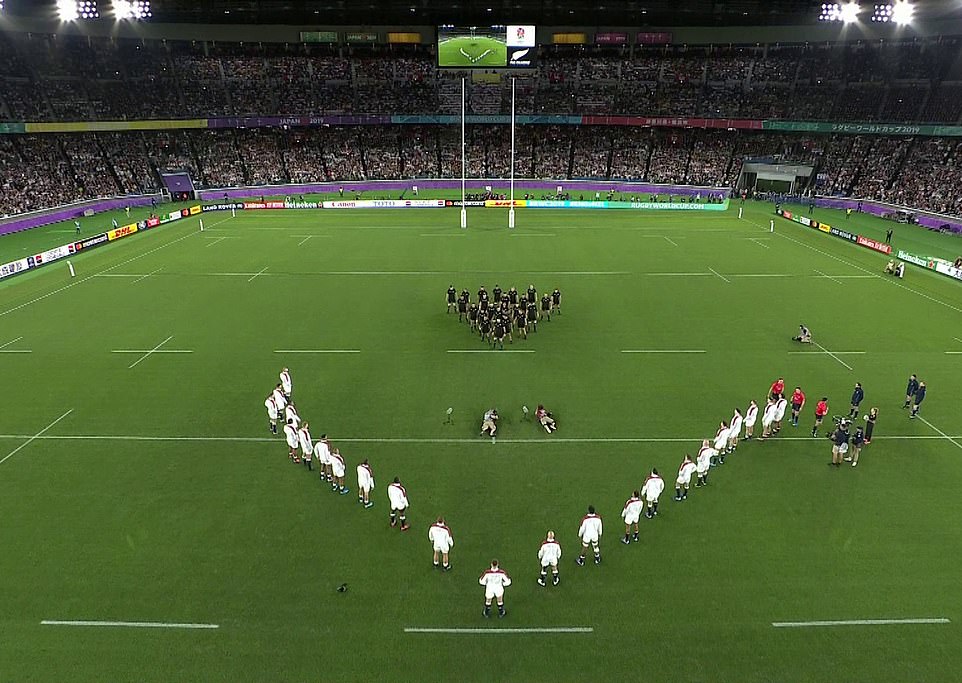 Players form V-shaped to face Kiwis before their Haka, after getting closer to their opponents 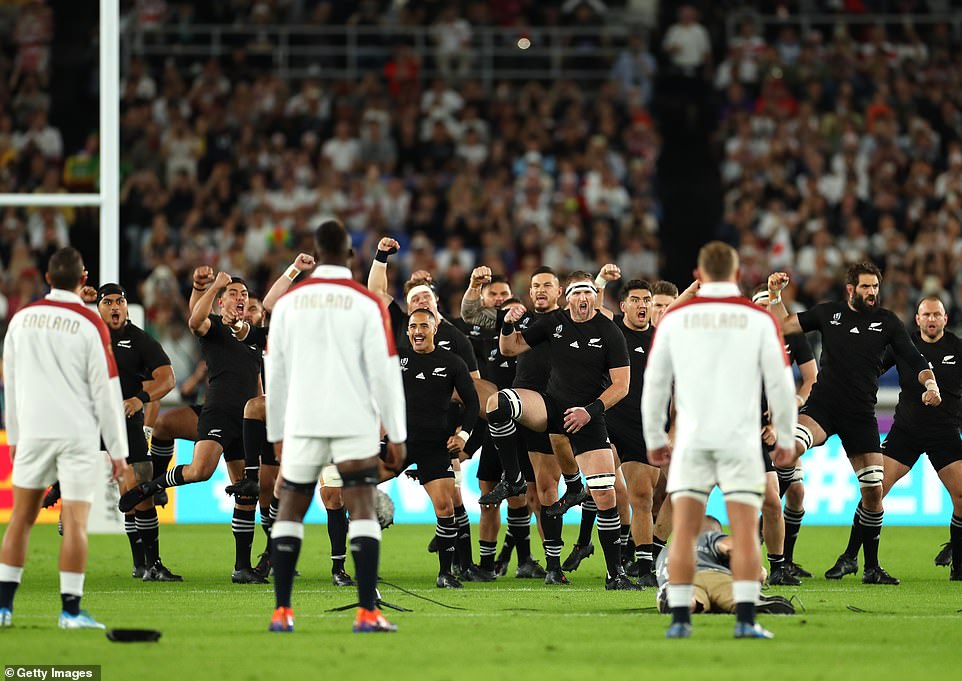 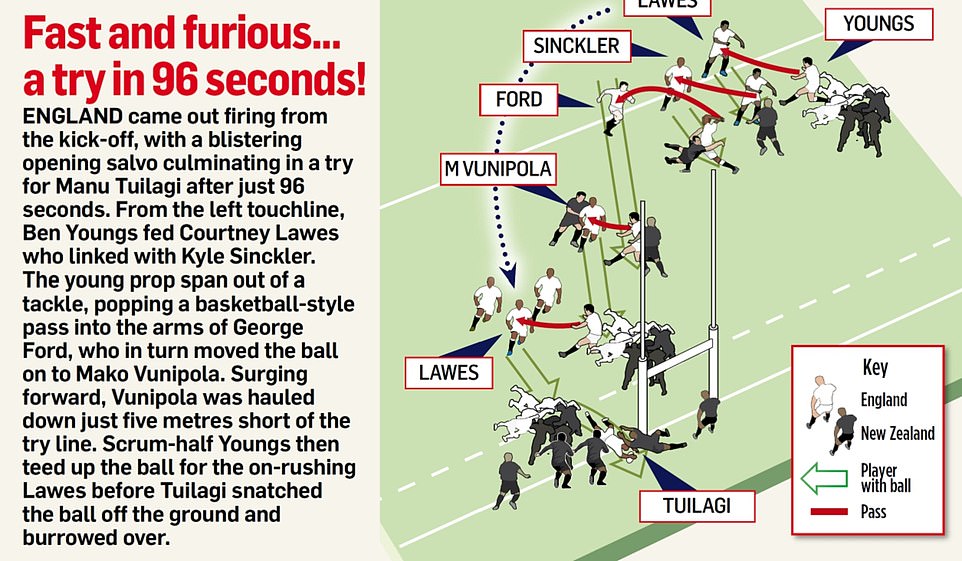 Maintaining the intensity of their preparations, England's players went flying. All details have been planned. Ford lined up to kick in, before hurling it at Farrell to kick his other foot and catch the Kiwis off guard.

Then advance the wrecking balls. Manu Tuilagi hit the first carry before Tom Curry followed his lead. In exchange for the grunt, Elliot Daly jumped Richie Moogun and England used every inch of field width.

Jamie George hugged the left side, accelerating in contact, before Courtney Lawes and Sinckler slid the ball off the tackle. Left, right, left. Bish, bash, bosh. Ben Youngs kept things going before Tuilagi dived in close. It was a beginning of the gods. If the night started as a Kiwi party, it was soon an English takeover. 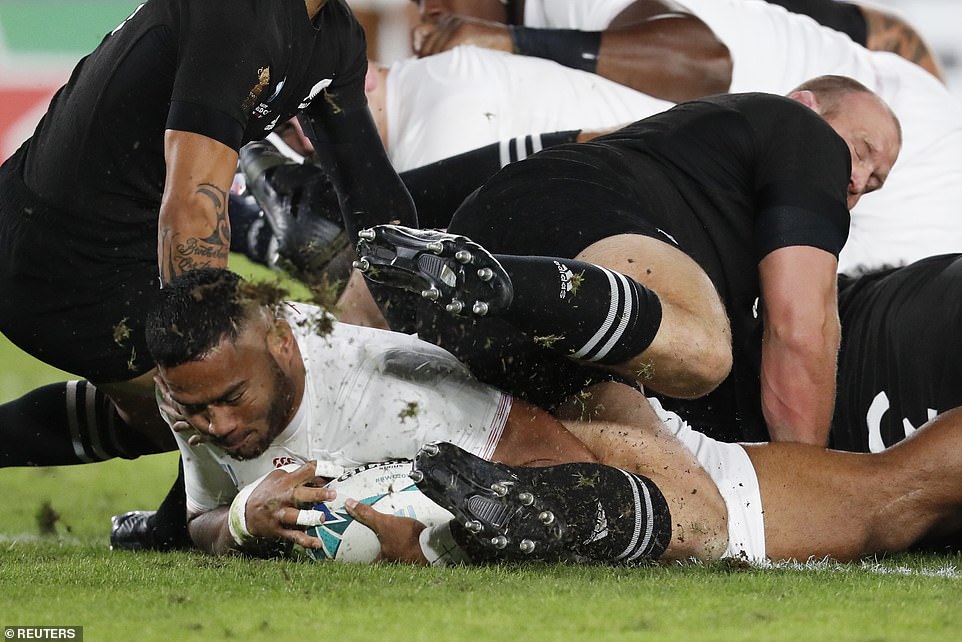 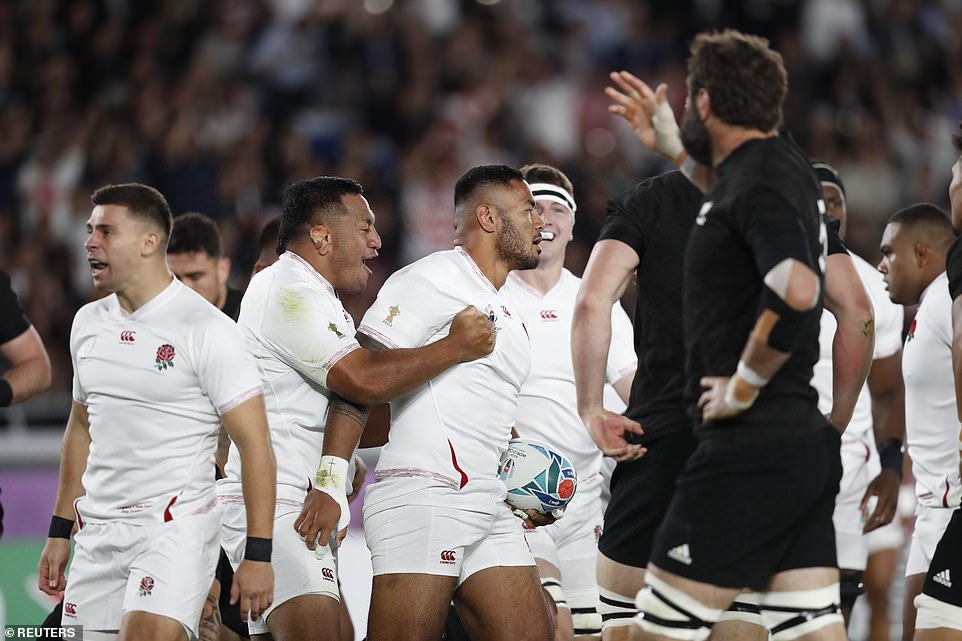 Tuilagi is invaded by his team mates after his initial attempt, as England made a big impact on the game despite being unlucky. 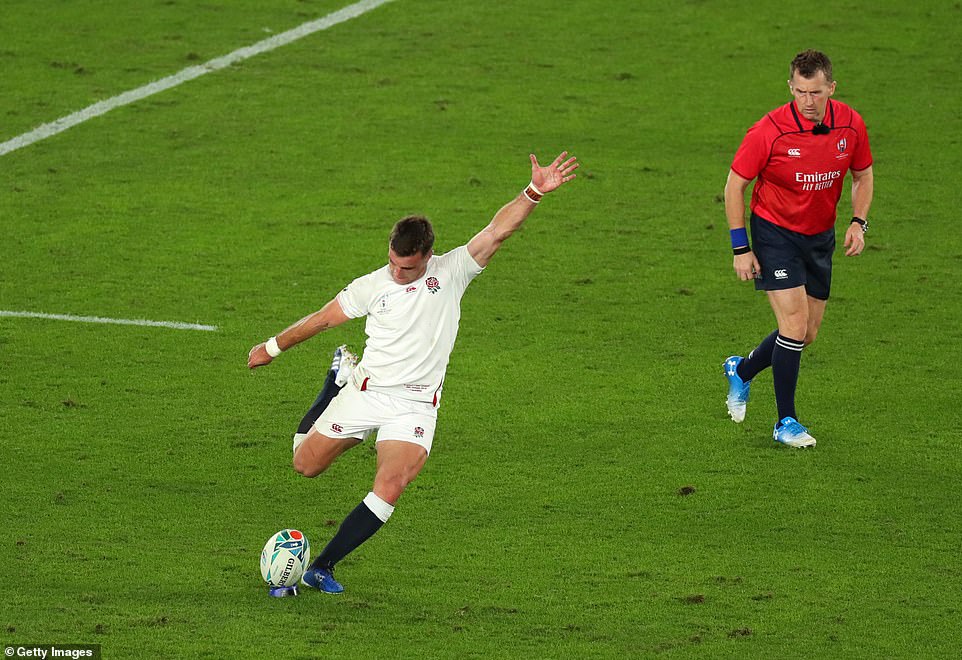 Ford spent his career answering questions about his size, but how he silenced his critics when he snatched the ball from defender Nepo Laulala's sweaty hands. It was one of those nights. His long kicks forced the fledgling Kiwi wing to spin 180 degrees. By the time they completed the full 360, the kickers were in front of them.

The pace was breathless. In the attack, Ford and Farrell weaved patterns like a Japanese tapestry. The strikers kept the ball alive in contact to sew phase after phase.

In one of his final acts as All Blacks coach Steve Hansen made a mistake in selecting Scott Barrett in place of Sam Cane in sixth place. His ploy was supposed to give New Zealand dominance in the lineup, but Itoje and Lawes stole ball after ball.

Teams often fly off against New Zealand before falling, but the crash never happened. England had two forbidden attempts – through Underhill and Youngs – but that did not stop them from advancing.

In the face of English pressure, the Kiwis threw passes that would not normally be thrown and the Kamikaze Kids – Curry and Underhill – punished every mistake.

At one point Hansen's face appeared on the big screen just after George Bridge was crushed by Anthony Watson. Hansen rarely looks disturbed – but his head fell into his hands. New Zealand was shaken. The only saving grace was that England had no more points to show for its initial dominance.

There was concern when Farrell suffered a dead leg, but nothing would get him out of the field when he scowled and limped during the first half.

Ford took over the kicking duties and, after pushing a falling goal to the right, extended the lead to 10 with a halftime penalty. 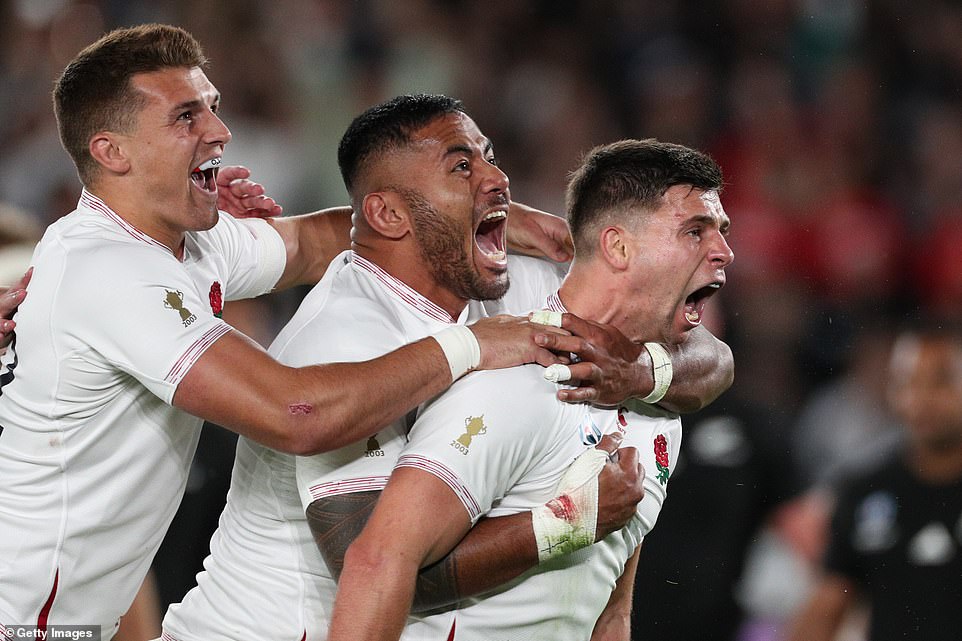 England could have won by a much larger margin, but an attempt by mid-scrum Ben Youngs (R) was ruled out by TMO 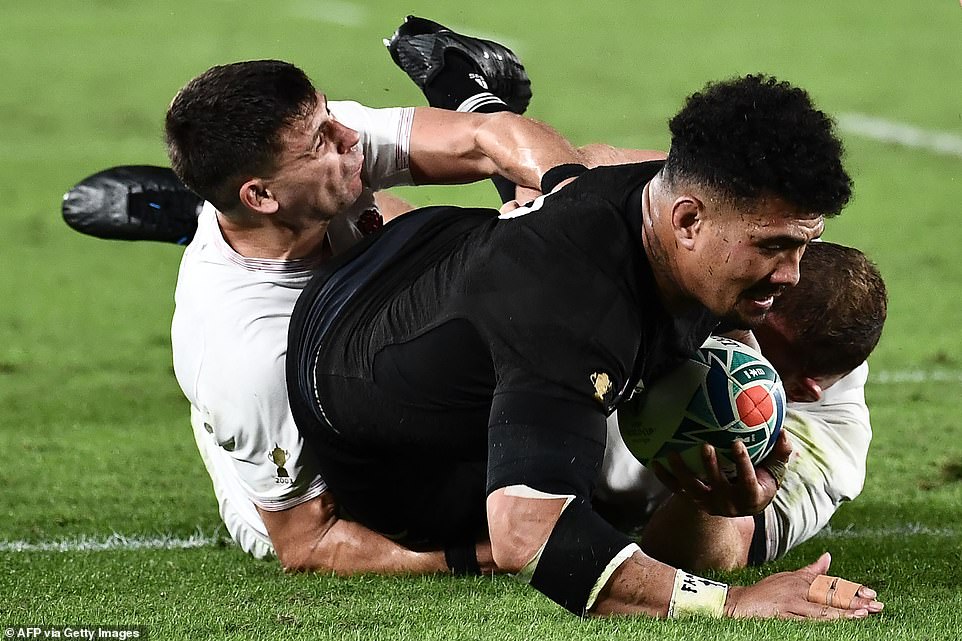 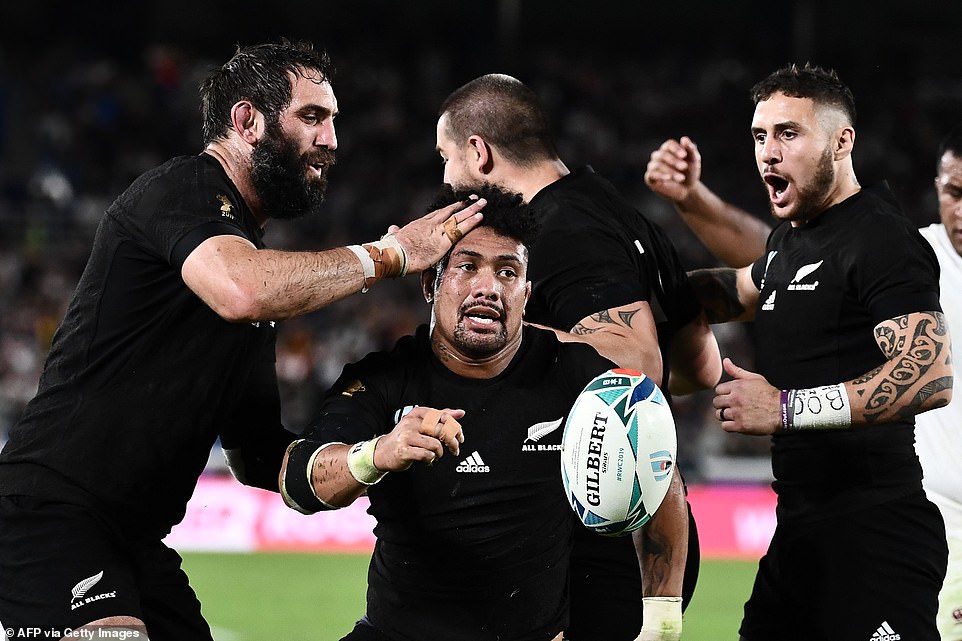 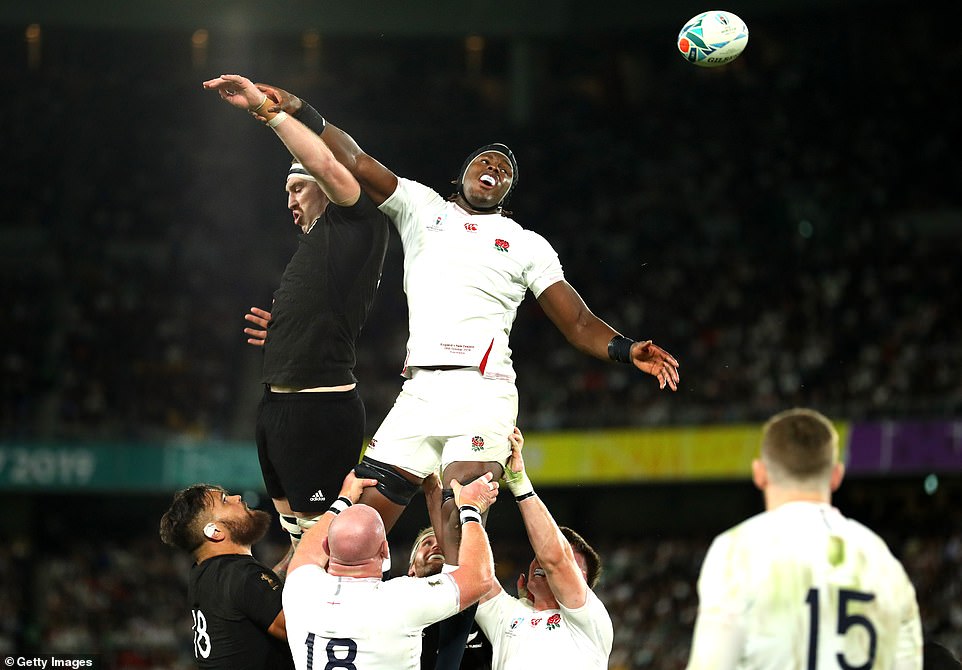 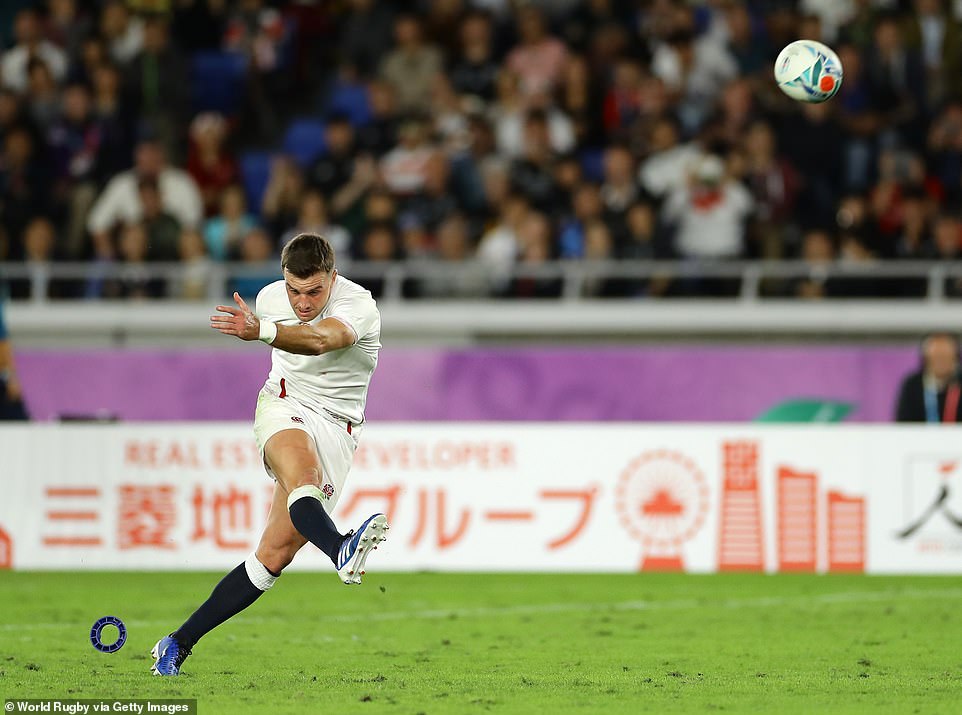 "New Zealand will come back, always come back," muttered the cynics who had seen it before.

Cane was brought in to combat English threats, but the All Black aura successfully disappeared after a blow.

Lock Sam Whitelock won 18 out of 18 at the World Cup before this game, but he was reduced to deadly status with cheap penalties in the second half.

Daly missed a long-range shot but regained his composure to knock Beauden Barrett into the air before Youngs's forbidden attempt.

Jonny May and Sinckler limped out – before English hearts were in their mouths when an armless challenge from Henry Slade was sent for a nomination. Slade escaped. England breathed a sigh of relief.

So a reminder of the danger of all blacks. Although it is fleeting. In his own five-meter line, George dropped a side line that Ardie Savea attacked for an easy score. One mistake, one try.

It took a trademark hit from Underhill – the toughest striker in this World Cup – to give England some breathing space. He crushed Jordie Barrett at 22, forcing a hit and three more points for Ford. The Kiwis barely had room to breathe, much less to run, with secondary lines of English defense coming in. 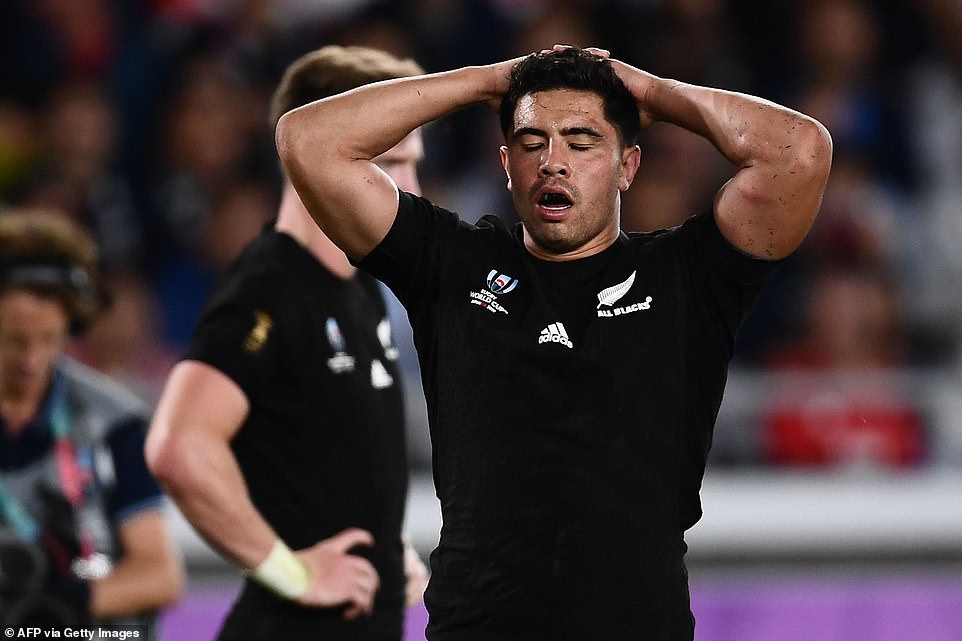 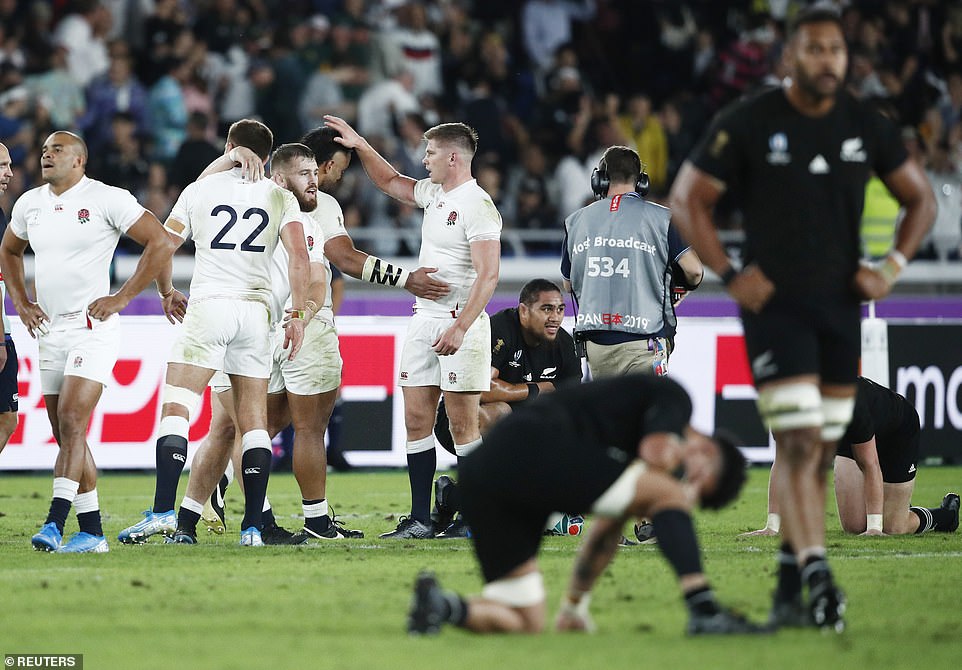 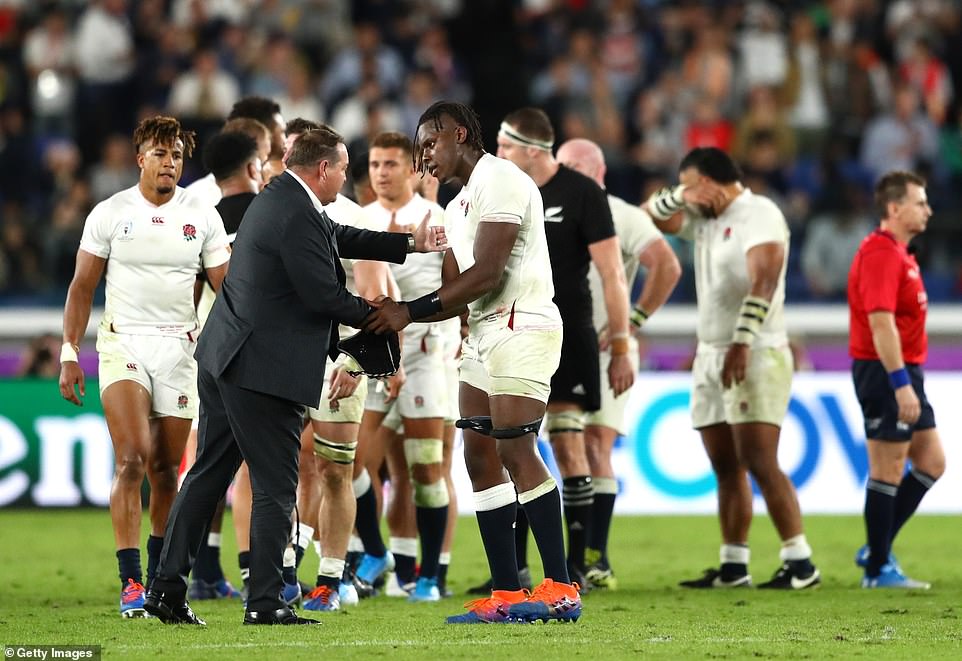 As the clock ticked, it was time for the early summer days in Treviso – where England was running, sweating and vomiting – to bear fruit.

A major penalty was reversed in favor of England. Whitelock had his palm in Farrell's face. He stayed on the ground until replays were played on the big screen – and Nigel Owens reversed his decision. Gameplay? We may never know.

More penalties, more points for Ford. The finalists from England arrived and ground New Zealand to pulp in black and white.

He threw a party in English, singing Oasis under the night sky of Yokohama, but the party is just beginning.