Amid questions from the opposition about the legality of their participation, Bolivian President Evo Morales will be running for an election on Sunday that could give him his fourth straight presidential term, nearly 14 years after he first took office.

However, unlike previous elections, the electoral race is more indefinite, and there are doubts as to whether it will be defined in the first round or a possible second round in December. In addition to the legal issue, according to analysts, may influence the voting, the economic stability recorded in the Evo Morales era and also the recent fires on the border with Brazil.

But how did the indigenous leader manage to get this election race over?

BBC News Brasil interviewed Bolivian government and opposition officials, as well as political analysts, about the electoral dispute, which has as its three main candidates Morales, from the Movement for Socialism (MAS), former president, writer and journalist Carlos Mesa, Citizen Community (Comunidad Ciudadana) and Senator Óscar Ortiz of the Bolivia Alliance Say No (Alianza Bolivia Dice No).

Evo's main opponent in this election, Mesa questions the process that allowed the president's candidacy. During the campaign, he said Bolivians will vote between "the authoritarian path" and "democracy".

On a recent visit to Buenos Aires, Mesa said it was "necessary to end the concentration of power and the theory that Bolivia cannot live without Evo." For the opponent, Morales "has already done what has to be done", such as valuing the concept of being indigenous in the country, "managing" the economy "reasonably" and "not repeating Venezuela's economic error."

However, he said he feared for his legacy and the drop in revenue after Brazil and Argentina bought less Bolivian gas.

Morales, on the other hand, has stated more than once that there was no legal maneuver or any illegality and that he is a candidate "because the people want" to continue in the presidency knowing that his life "has improved" in his administration.

Morales took office in January 2006 and is the longest-serving Bolivian president in the country's history.

A constitutional change passed in 2009 created the possibility of presidential reelection for two consecutive terms of five years each, which allowed him to run in 2010 and 2014.

In 2016, Morales supporters called a referendum to amend the constitution again and allow it to run for a fourth term. But the proposal was rejected by most voters by a narrow margin: 51.3% voted "no".

Nevertheless, the Constitutional Court ruled in November 2017 that the two-term limit was "a violation of human rights" and authorized the new candidacy.

The decision prompted opposition charges that the government was being favored by the court. It also divides political analysts and local jurists into a debate that remains relevant at the end of this race. 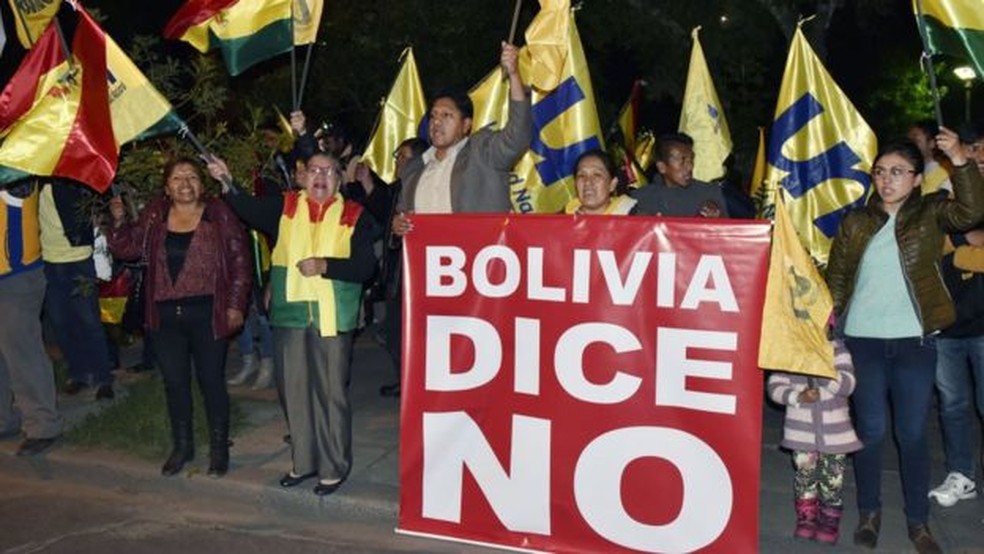 "It was an unconstitutional postulation. The government stated that the San Jose Costa Rican Human Rights Agreement (also known as the American Convention on Human Rights) is above the national constitution. But the truth is that the result of the popular referendum was not respected. "said economist Javier Gómez of the Center for Studies on Labor and Agrarian Development (Cedla).

For political scientist Fernando Mayorga, professor at the Public University of Cochabamba, the legal procedures were respected. "It is written in the Constitution that international agreements are superior to the Magna Carta itself. And the Constitutional Court (based on the San Jose Costa Rican agreement) allowed the election not only for president, but for all positions," said Mayorga, author of books on Morales politics.

The controversy surrounding Morales' new candidacy may have contributed to the dispute.

"Evo is ahead in the polls, but this time it is not clear that he will win in the first round. He is a politician who generates love and hate and several contradictions. For example, while about 60% approve infrastructure works that held in the country, 60% also reject him to be a candidate again, "said analyst José Luis Galvez of the Ciesmori Institute of public opinion polls.

Morales may win in the first round, but if the polls are correct, not by the wide margin of previous elections.

A small La Paz businesswoman, who spoke on condition of anonymity, criticized Morales' stance after the referendum. "Evo did a lot of good things but lied that he would respect the 21-F result (February 2016 referendum) and would not be a candidate if the 'no' won," she said.

"The 'no' has won, and he is there now, candidate again. Our country needs alternation, for the sake of democracy. I will vote for Mesa, like many people, especially to try to keep Evo from continuing."

For analyst Roberto Lasema of the Center for Studies on Economic and Social Reality (Ceres), Morales "broke the promise that he would not seek another mandate." 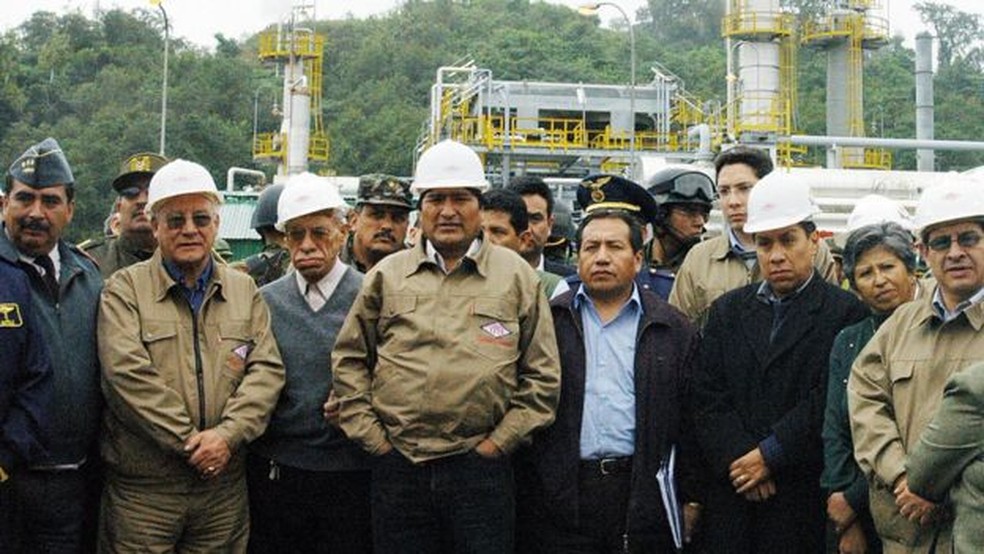 Economy Minister Luis Arce says in a telephone interview with BBC News Brazil that it is only natural that Morales's management will erode because of the long term in the presidency.

He notes, however, that new South American rulers such as Jair Bolsonaro in Brazil, Mauricio Macri in Argentina, and Sebastián Piñera in Chile have "quickly lost popularity" – in some cases dramatically, such as Macri's. . 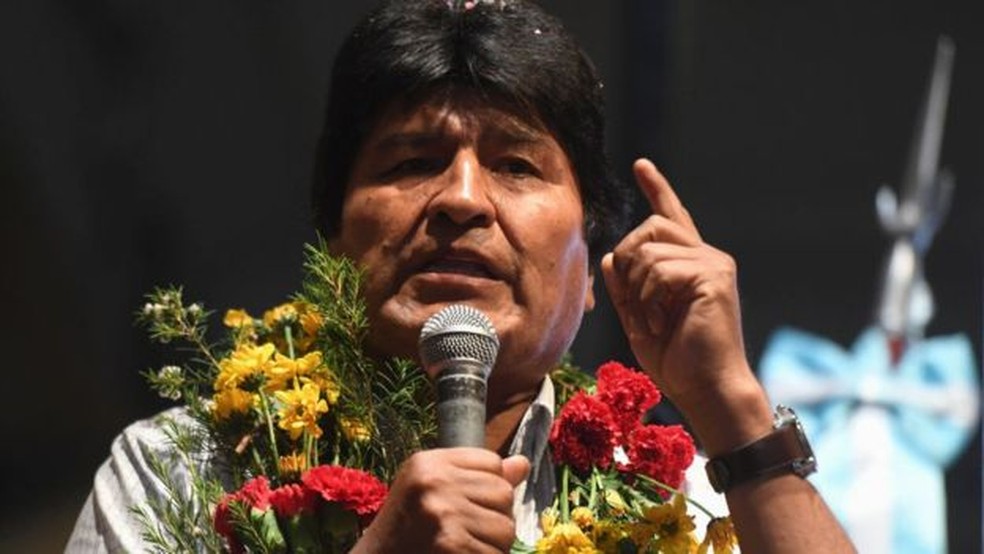 According to the minister, the Bolivian economy should grow again this year. He points out that economic stability is a decisive factor in the vote of Bolivians.

"We are aware of the effects of world problems, such as the trade war between China and the United States, which added to the problems of Argentina and Brazil, which began to demand less Bolivian gas. Nevertheless, our economy remains solid and growing," he said. Arce, citing government indicators such as the fall in poverty (from 38% to 15% in the Morales years), among other indices recorded in more than 13 years of management.

Arce also said that if the opposition is elected, Bolivia may have economic problems similar to those of its neighbors.

"The opposition poses a risk, as are Macri in Argentina, Bolsonaro in Brazil, and Lenin Moreno in Ecuador. If elected, the opposition will privatize, eliminate the benefits we distribute and generate inflation. So we think Evo will win in the first round. The undecided will opt for economic stability against neoliberalism. "

According to the minister, Morales must continue to "conclude and consolidate" what he has been doing.

For Mayorga, the government campaign, whose motto is Future Safe, "is not a campaign of fear." "The Evo government does represent economic stability. And Mesa was once president and resigned without taking important steps, such as Evo's nationalization of hydrocarbons," Mayorga said.

Mesa was deputy to then-president Gonzalo Sánchez de Lozada, who left the country amid protests, and spent less than two years in office before resigning amid protests.

Critic to the current government, Javier Gómez, from Cedla, says that until a few days before the fires this year in the Bolivian Amazon rainforest near Brazil, Evo Morales had a tendency to win in the first round.

In his view, the fires turned out to be the trigger for protests "for the environment, democracy and against a new election of Evo" in various parts of the country.

"Concern for the environment affected mainly the vote of the young, and the fires eventually channeled popular dissatisfaction with the government's institutional bankruptcies to solve the country's problems. The 'punishment on Evo' vote grew after the fires." says Gomez.

For the economist, the fires occurred because of climate change, but also because of the government measure of July, which expanded the area allowed for "controlled" burning to increase grain cultivation.

"A lot of people have set fire without knowing the proper way to do it. Millions of hectares have been burned, among woods and pastures, mainly on the border with Brazil. And this will affect the vote of many Bolivians," says Gómez.