The Yamaha YZF-R3 2020 has just arrived in Brazil with the most important changes since its launch in 2015. Absolute leader of sales among the "small sports", the R3 renewed itself after Kawasaki Ninja 300 evolved into Ninja 400.

With the Honda CBR 500R going out of line earlier this year, this category was well focused only on these two models, and with a broad current sales advantage for R3 over "Ninjinha" (see detail at end of article).

Realizing the dream of having a motorcycle similar to those of MotoGP is for few. Models like a Ducati Panigale V4 or a Yamaha YZF-R1 are distant for most not only because of the price, but also for the riding technique they require and the need for a proper place to enjoy their over 200 horsepower.

As a result, the "little" girls eventually fill this space in the minds of motorcyclists with models that are more affordable in price and riding. With standard ABS brakes, as required by current legislation, the YZF-R3 costs $ 23,990 in the entry version in blue and matte black.

For racing lovers, the automaker offers a version with the painting "Monster Energy MotoGP Edition" for $ 24,990.

With the refurbishment, the bike was $ 700 more expensive compared to the 2019 model. Lacking more competition, R3 and Ninja 400 have high values ​​for the displacement that fit. 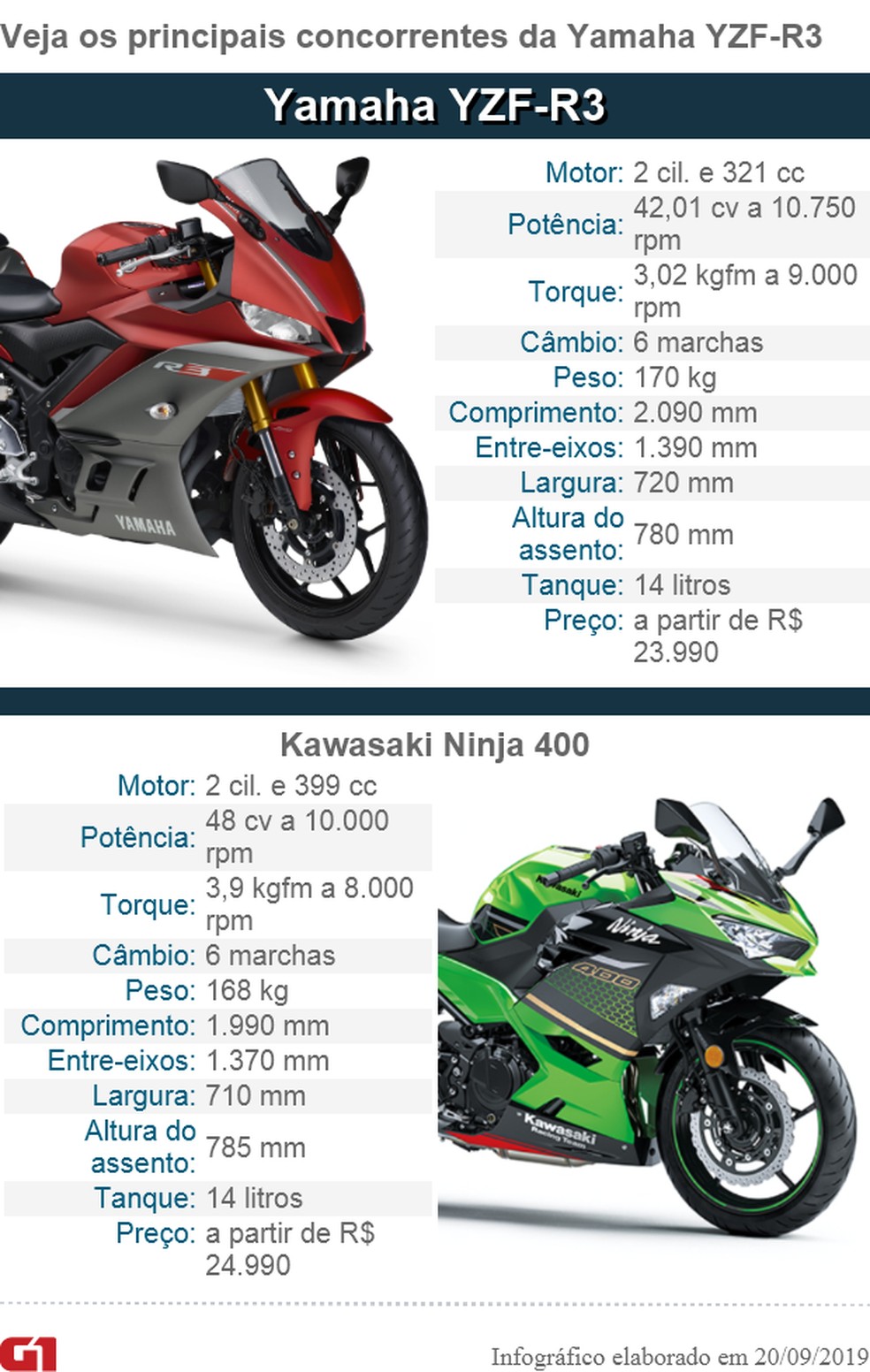 The first contact of the G1 with the R3 2020 was at the Fazenda Capuava track in Indaiatuba (SP). It was a good opportunity to get the bike to maximum performance and also to know how it performs in a smoother ride.

As a highlight, the R3 impresses with its ease of driving. Despite its well-crafted look, it is riding-friendly for just about any rider, even for beginners who want to feel like Valentino Rossi. 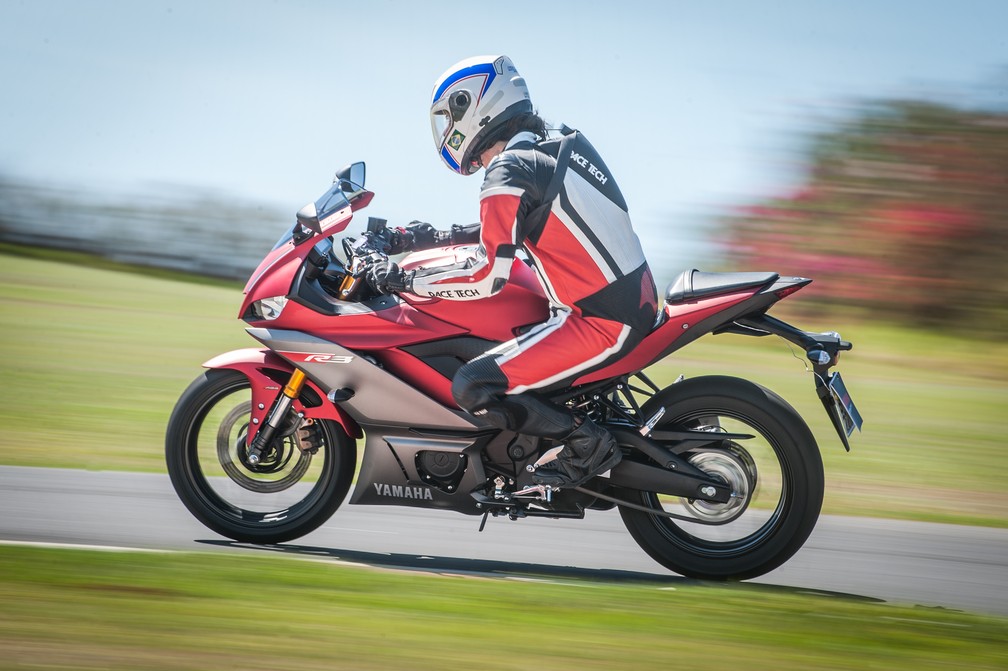 Its ergonomics have been altered with the 22mm lower handlebar, giving more sportiness for riding without compromising comfort for ordinary commuting.

With the new wider tank design, the rider is also better fitted. However, the 14 liter volume of fuel was maintained.

The only "but" is that people over six feet tall may feel a little "tight" on the R3, mainly because the legs get too bent. 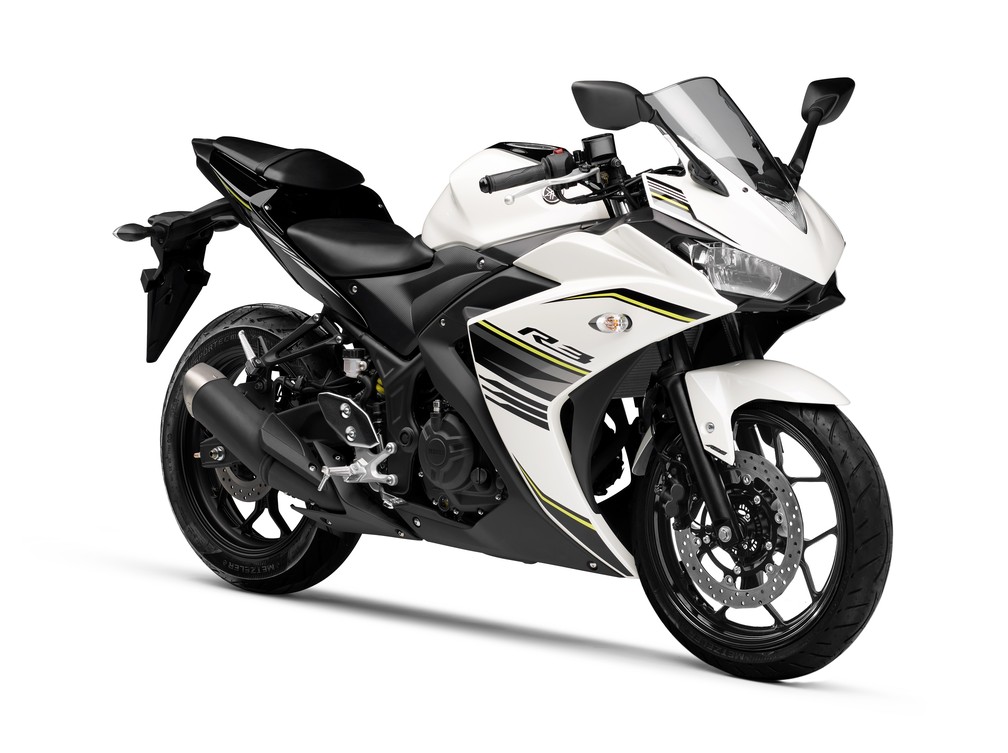 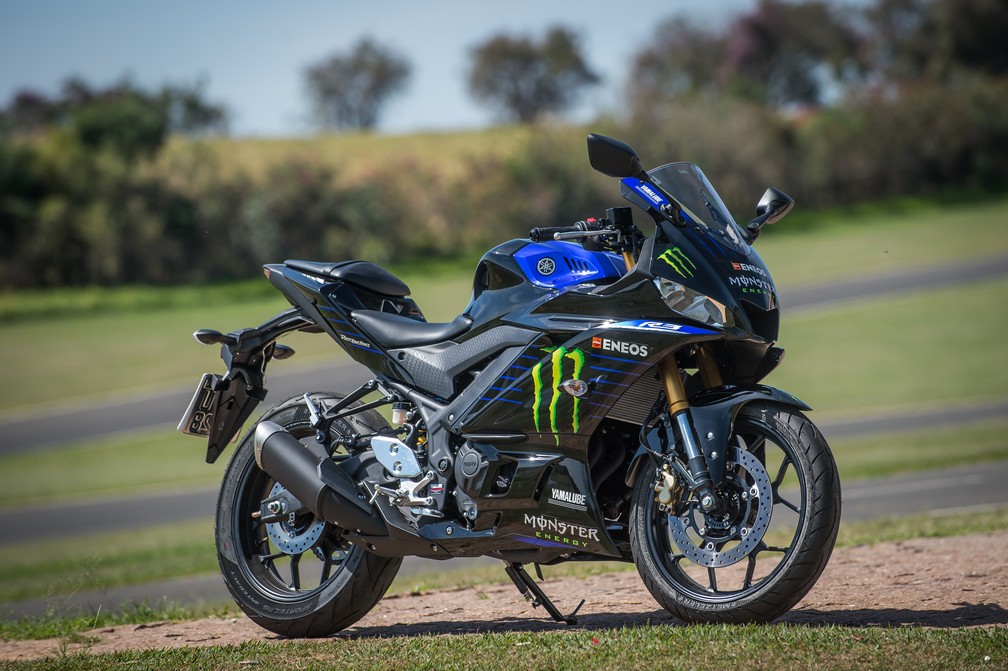 Yamaha YZF-R3 Monster MotoGP Edition is the most expensive in the line – Foto: Divulgação

The new look of the R3 was not only for aesthetic purposes.

With the revamped set of fairings and new front bubble, the bike got 8 km / h faster.

But the motorcycle's final speed numbers are not released, as is usual with automakers. It may seem that 8 km / h more is little, but it makes a big difference, even more in circuits. 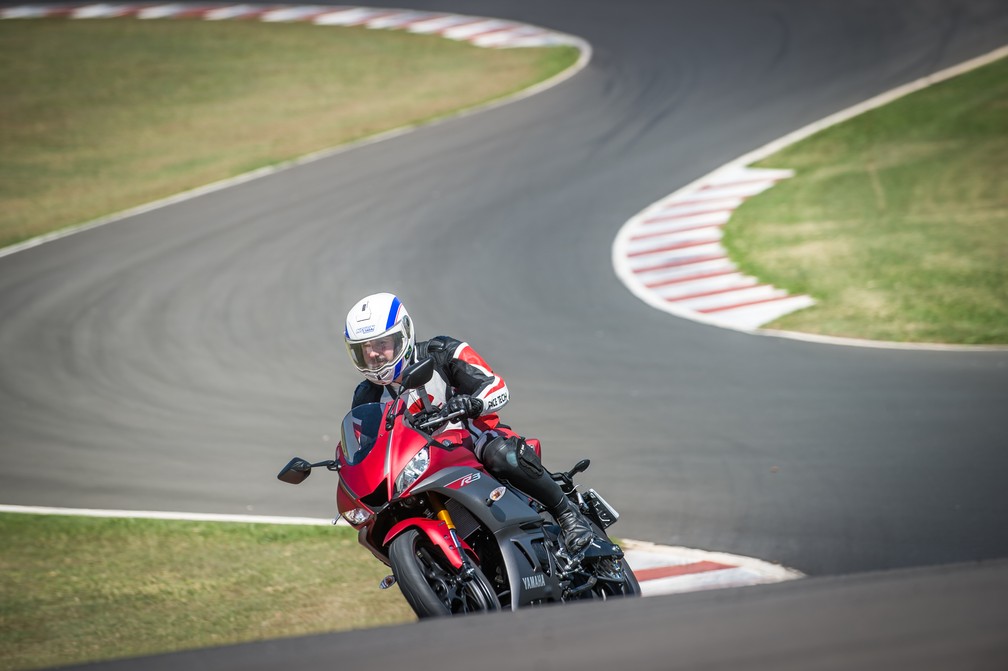 As the R3 engine remained the same compared to the previous model, this superior performance is all the result of the new aerodynamics.

Of course, in the direct dispute with the Ninja 400, the R3 is at a disadvantage at this point. The engine is smaller and less powerful than its rival, but does not disappoint in its performance. It offers good torque already at low turns, which ensures fun on the track and comfort in urban travel.

You only need to use the 6-speed gearbox well, the first being very short, to be able to enjoy the best of the two-cylinder. 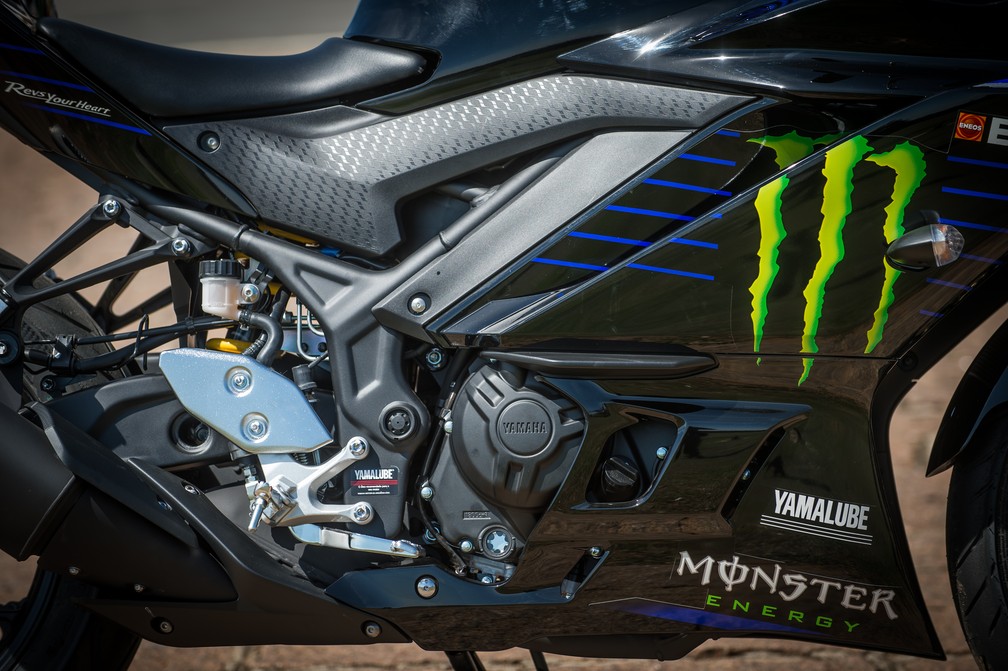 Instead of investing in a new engine, Yamaha decided to further refine the R3 set. In addition to the aforementioned improvements in aerodynamics and rider positioning, the small sports car has gained an inverted front suspension.

It is a damping system most commonly seen on larger bikes. The Ninja 400, for example, has no such suspension. Not even the CBR 500R had it. 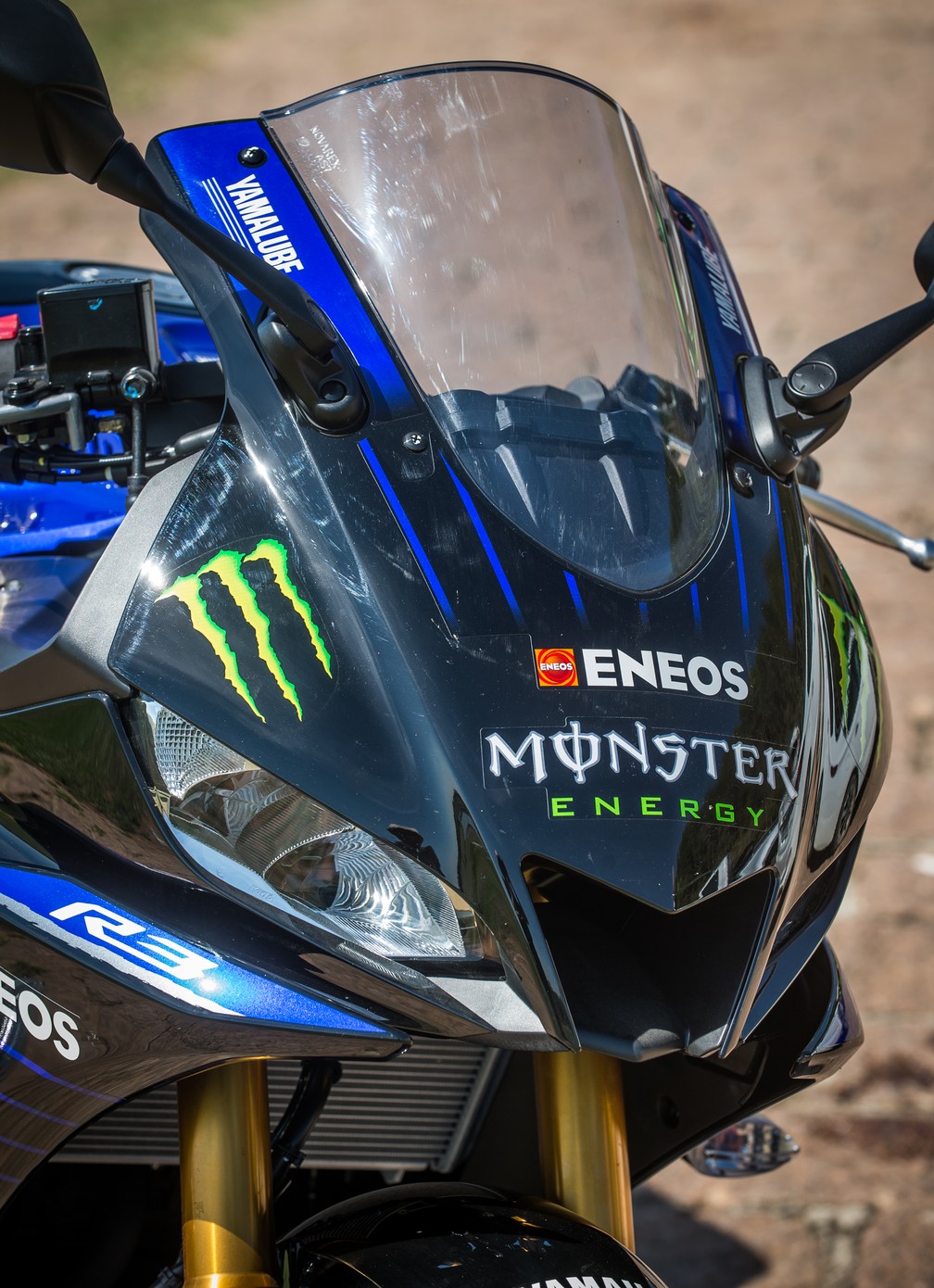 This type of suspension is literally mounted upside down on the motorcycle, leaving the lighter assembly in the wheel region and ensuring more firmness in the handlebars.

In the circuit, you can feel how light the R3 has for lightweight steering and cornering, but without compromising stability.

To top it off, the inverted suspension still gives the bike a tougher look.

Another new feature for the R3 2020 line is its new panel, which is now 100% digital. In the old one, it was mixed, with digital and analog information.

Despite being very simple, the panel was easy to see, especially with the arrival of the "shift light", which warns the pilot the right time to change gears. 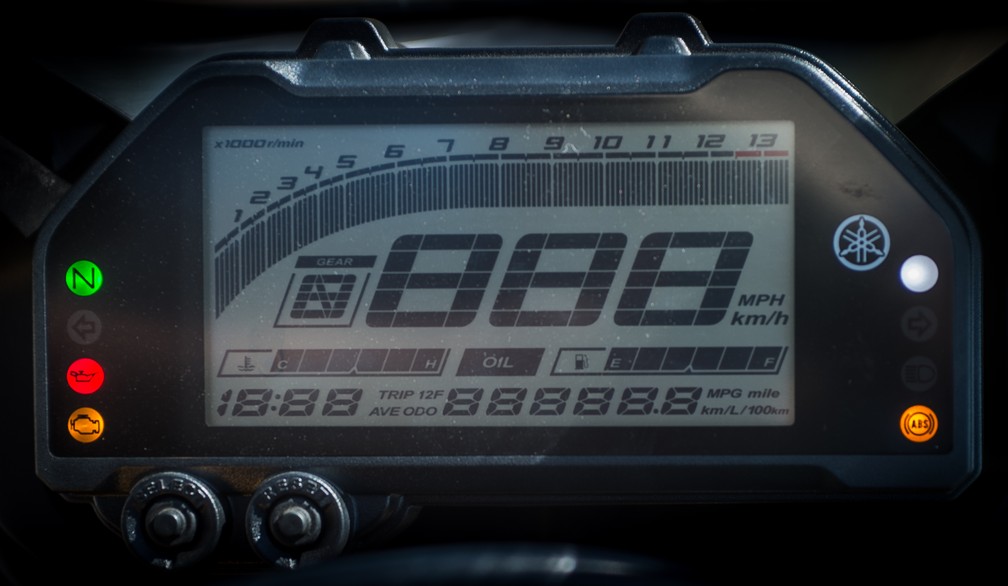 Even after the arrival of the new generation of Ninjinha, R3 remains the absolute leader among small sports.

Since now the R3 has evolved a lot, although it is not a new generation, it is expected that its reign (in sales) will continue smoothly. 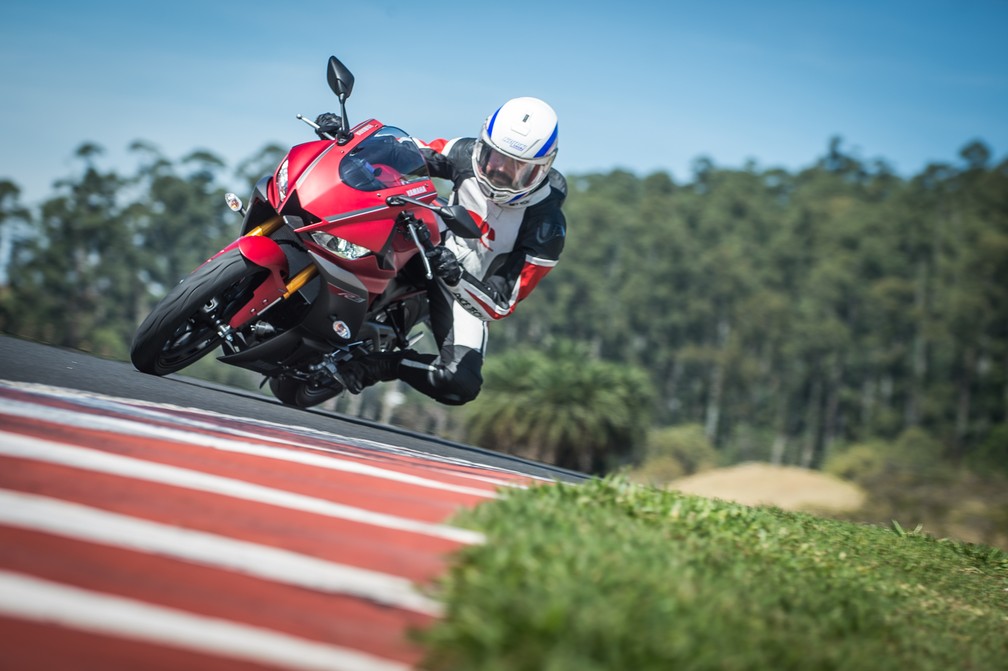 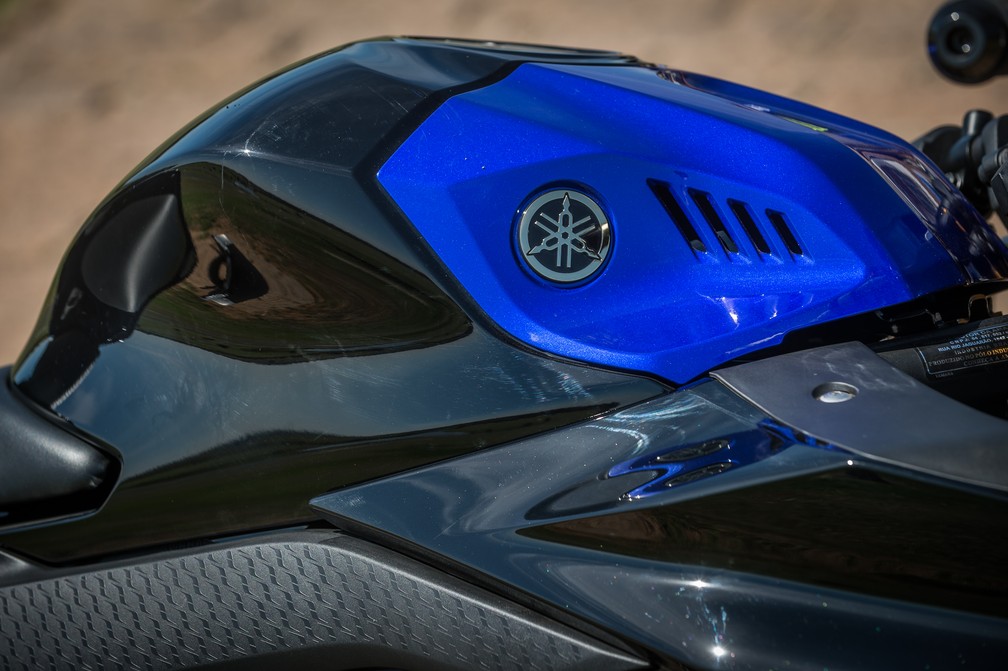